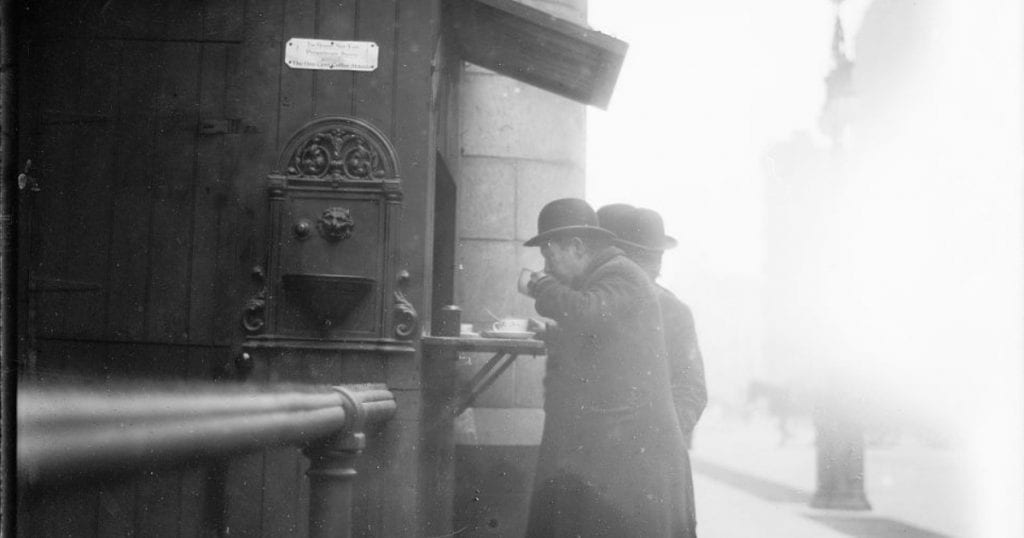 Chances are, if you’re reading this at work, you either have a cup of coffee sitting on your desk or you’re planning on grabbing one in an hour or so.

Coffee breaks nowadays are a staple of office culture and are so ingrained in our lives that it’s hard to know where our passion with all things coffee ends and the tradition began.

Even if nowadays nobody would know what to do without this workaday ritual, there weren’t always vending machines nor did every office or factory have a coffee break room!

but the origin of the coffee break remains a mystery.

The history of the coffee break has gone hand-in-hand with the working days, so much so that it has become one of the cornerstones of workers’ rights since the beginning of the century.

Before then, stopping to drink coffee during working hours was considered a sacrilege and the thought of providing workers with an automatic machine was definitely opposed by the management and the property “to not give opportunities for recreation to those who were paid to work and not to drink a coffee in the company”.

Several companies argue that they’re the first to have instated the perk.

There are those who assume that coffee breaks are linked to the invention of the espresso machine. Trying to get his workers to drink their coffee faster, Luigi Bezzera in 1901 conceived one of the first espresso coffee machine that would use steam pressure to force water through ground beans.

One of the first companies to offer an official breather during the workday was Buffalo, New York’s Barcalounger Company (when it was known as the Barcalo Manufacturing Company), the reclining-chair company, which in 1902 made a 15 minute break part of its employee benefits package. Free coffee for employees was listed in the expenses of the company in 1901.

As industrialized, commercial (read: fast and cheap) coffee became the rage and automatic machines were quick to dispense cups to folks.

After WWII, the first coffee vending machines started popping up in offices.

But it wasn’t until 1952 that the “coffee break” got its official title when the Pan-American Coffee Bureau (a corporate interest group designed to encourage Americans to drink coffee from their southern neighbors in places like Colombia and Brazil) invested $2 million a year in radio and press ad campaign to advertise what will become a habit of every office, urging folks to “Give yourself a coffee-break – and get what coffee gives to you”.

But possibly the biggest turning point for the institutionalization of the coffee break was when in 1964, the fight over the coffee break as an unassailable right of workers nearly brought about a strike between members of United Auto Workers and the major car manufacturing companies (the Big Three: Chrysler, Ford, and GM) coming to negotiate a 12-minute a daily coffee break.

1968 in Italy is synonymous with protest movements that clamored for a radical transformation of society. The workers’ movements played a central role. In the factories they began a series of strikes and disputes aimed at obtaining greater rights for the workers.

The vending, which carried out all his work inside those establishments, underwent very profound changes. Not in terms of loss of turnover and volumes (due to the frequent closure of the factories) but the transformation of the concept of breaks which abandoned the inconvenient role of time “stolen” to work to become a deserved moment of rest and sociality.

One of the pioneers of the time, to try to make the business leaders understand that a break could have also positive effects on work, quoted Don Bosco: “If I’m too kneeling to pray I do not think about the Lord anymore, but at the knee that makes me bad!” he repeated in the various management offices.

The today’s value of the coffee break

Naturally, employers were quick to notice their wage-earners’ improved performance after those coffee breaks, which was pretty convincing incentive for them to keep the habit on the time clock.

Vending today has assumed a real social function in the world of work.

The vending machine inside a company is confirmed as a place of aggregation and, at the same time, a break from the routine of daily work, a meeting point where to digress, sipping a coffee or nibbling on a snack.

One of the great added values of the vending is precisely this intense potential for communication interchange.

Other cultures, other coffee breaks

In Germany, they have “kaffeeklatsch” to gather and discuss the day’s events over a cup of coffee.

In Sweden, the “fika” is a kind of coffee break twice a day (morning and afternoon) but that has little to do with the classic break at the bar or in front of the coffee machine. It’s the secret to working happy!

The “fika” is a well-established tradition, a sacrosanct ingredient to reduce work stress.
In fact, these opportunities for exchange and socialization increase efficiency and improve productivity so much so that many Swedish companies have made them mandatory.

Even on the IKEA website we read that some of the best ideas and decisions take place during the “fika”.

Let’s face it! It is not just coffee that creates the conditions for a productive pause, but the temporary fall of social hierarchies, which makes Swedish workers the least stressed in the world.
They exchange information, smooth conflicts, remove “the rust” from the brain and promote creativity.

No one quite knows the coffee break’s true origins.