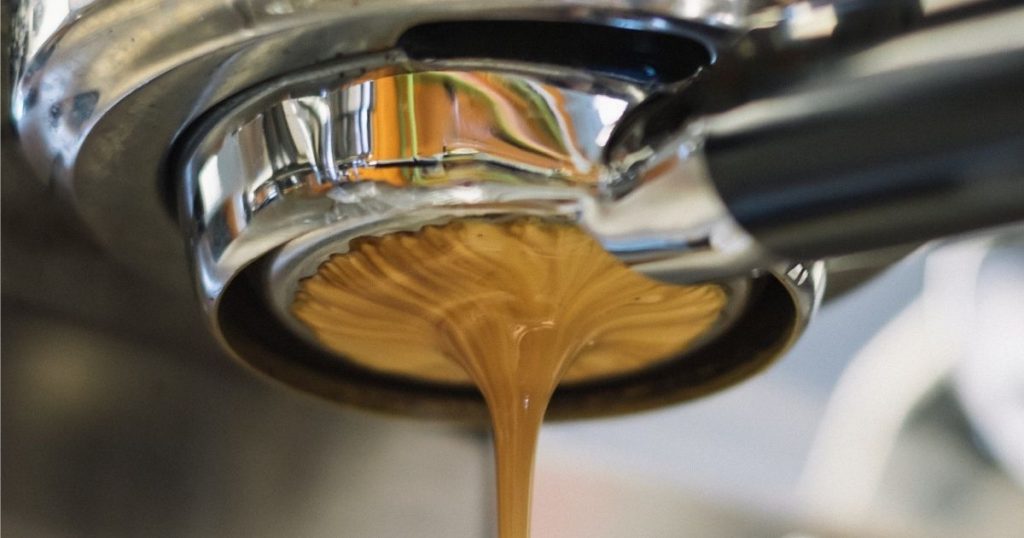 The crema is essential for the espresso coffee.

With the espresso system, when 7 grams of finely ground coffee meet hot water forced at a pressure of 9 bar for 25-30 seconds, first, we obtain a solution of caffeine, acids, proteins, sugars and other substances followed by a lighter emulsion of impalpable elements composed of coffee particles and CO2 micro-bubbles.

These microbubbles attach themselves to the oils and fats present in the coffee, then rise to the top of the drink.

This emulsion of microscopic droplets of oils and water is known as espresso crema. It is fine & dense in texture, has discrete thickness, and a hazelnut brown color that covers the surface of the espresso in the cup.

HOW THE CREMA IS FORMED

The crema is formed thanks to the combined action of hot water and pressure which, in contact with the fine ground coffee, help release the carbon dioxide stored by the bean during roasting.

Pressure is essential for the success of the espresso crema.

Therefore, the other extraction methods do not produce crema.

The crema is a consequence of the roasting and extraction process that tells many things: it is indicative of the quality of the bean, the roasting, the equipment, and the hand of the barista. Equally, it’s even able to influence the consumer’s perception.

One thing is for sure: the crema, that one of the perfect espresso, is not froth! It’s crema!

The difference is substantial

The crema differs from the froth for the absence of bubbles.
While the froth is considered a defect in the cup.

A cup of espresso with a higher percentage of Arabica is different, even visually, from one with a prevalence of Robusta.

This chemical-physical composition leads, in espresso extraction, to obtain a very dense crema thanks to the type of woody fibers present in the coffee, normally formed by large and thick bubbles, even if in lesser number than Arabica, due to the lower quantity of fats.
This gives the crema the classic orange peel appearance or as if they were sand dunes.

At the same time, however, being “robust”, they are often able to support the weight of the sugar crystals for a few seconds.

It is as if the crema is made up of 500 large, thick plastic balloons. If you jump on it, the balloons hold you up for a while before exploding under the weight. Obviously, however, given their size, there won’t be many in the cup.

This is why when the Robusta crema begins to dissolve (usually starting from the edges of the cup), the level of crema drops very quickly and where the hole is often punctured, the hole remains visible.

However, this occurs only if we use a good Robusta, as with a low quality coffee the fatty and fibrous components would not give the same “substance” to the crema.

on the other hand, gives the coffee aroma and produces less crema, but more compact, elasticity with a brighter color than Robusta.

The main difference regarding the creaminess of Arabica compared to Robusta is in the greater quantity of oils present as well as in the difference in the fibers that it contains.

Looking at the crema of a good quality Arabica, we notice that its texture is made up of thousands of tiny bubbles, imperceptible to the eye, which however give the surface a bright and reflective aspect.

If we look at the amount of crema a few seconds after brewing, we realize that it has almost the same thickness as an espresso made with Robusta, but its consistency, even on the palate, is totally different.

Furthermore, if we try to break the crema with a spoon or put sugar on it, it will fall into the liquid below in a short time, but the layer of crema will re-form in an elastic way.

It is as if in the cup there were 2000 very small and thin balloons (like those for making water bombs at the beach). If you jump on them, you will burst 500 and you will end up below, but the remaining number will be enough to reform on the surface a layer that will hide you from view.

If we wait without doing anything, neither adding sugar nor turning it, we will see that the espresso crema will begin to open from the center.

THERE IS NO COFFEE THAT PRODUCES MORE CREMA

But the characteristics are so different, especially on the palate, that they give the impression that Robusta makes more crema than Arabica.

NICE DOES NOT MEAN GOOD

No visual examination can ever replace the tasting. And also from this point of view, the crema on the espresso could be deceiving.
The presence of a nice crema can give indications on the extraction, correct or not, on the degree of roasting, but it will not make us understand if the espresso has a good taste.