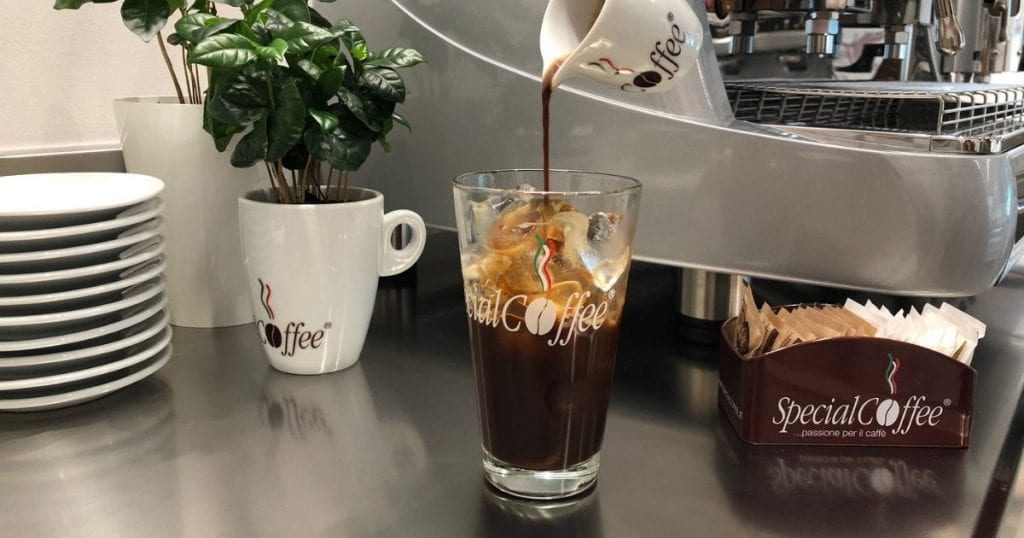 This year summer has hit the northern hemisphere.

And with it has come a morning-altering decision for the coffee drinkers: switch to cold coffee to combat the oppressive heat or commit to hot coffee as a kind of bold, unnecessarily masochistic act?

Italians still like the crema, experience and smartness of espresso which is something that a glass full of cold brew coffee can’t touch. However, those who prefer their summer elixir over ice and search for the ultimate cold coffee experience have also grown accustomed to another question: “regular or cold brew?”

“Cold coffee” is pretty much how most people would describe a caffè freddo or cold brew coffee but they are not to be mistaken.

They’re both made of coffee and water and both are served cold but the little differences between the two make a big difference when it comes to sipping them.

In Italy, home of espresso and moka coffee, the cold (or allegedly) coffee (aka “caffè freddo”) is actually often coffee cooled to room temperature and then refrigerated perhaps for hours.

The vast majority of Italians do so.
The result is certainly an enjoyable temperature, but not always the same with taste.

Coffee, once ready, has a fairly short life. After a few minutes in contact with oxygen, it loses most of the aromas and with time it further deteriorates.

Coffee beans contain oils that alter over time: more slowly when the bean is whole, quickly once it is ground, very quickly when the coffee is not drunk immediately after being extracted, gradually developing rancid aromas.

In order to make a good caffè freddo, you must proceed speedily with pouring the freshly brewed coffee directly over the ice. Standard caffè freddo meaning hot brew served over ice.

Coffee lovers know how difficult it is to find a caffè freddo that hits the spot.

Why? Because there are those that try to hide the bitterness of the caffè freddo by adding spoons full of sugar. Then there are those who add loads of ice thinking that is what cold caffè freddo is about. They tend to forget that in warmer weather, the ice melts quickly creating a diluted and watery coffee disaster.

Otherwise, did you know that Italian espresso is prepared in a few seconds? The cold brew coffee is the exact opposite.

In the preparation of the cold brew coffee, the ice-cold water is allowed to percolate drop by drop over a filter containing the ground coffee.

The password for the cold brew coffee is “slowness”. Dripping occurs very slowly.

We need 8 to 12 hours to prepare a good coffee concentrate that can then be diluted with water, milk or even drunk straight.

The main difference between cold crew and caffè freddo involves temperature. That is, cold brew coffee is brewed cold and never heated, while iced coffee is normal coffee that’s then cooled down.

Cold brew coffee is brewed cold and the grounds aren’t subjected to the intense heat of boiling water thus protecting them from any thermal shock.

Ever poured hot coffee over ice? Then you’re familiar with diluted coffee and as we all know, watery coffee is sad.

Cold brew puts the dilution in our hands.
Since it’s already cold or at room temperature, the addition of ice or added water is entirely optional.

In any case, however

cold brew coffee or caffè freddo can be the main ingredient for caffè shakerato, affogato, granita, frappè, espresso on ice…
And let’s not forget iced coffee with crushed ice and frappuccino with milk which Americans like so much.
It can also be sweetened with liquid sugar, chocolate or cream as well as enriched with spices of all kinds.
Then there are those who prefer the strong version with the alcoholic correction.

In the end, it doesn’t matter if you like caffè freddo or cold brew coffee more.
In summer it’s important to stay hydrated and more importantly, caffeinated!

WHY INVEST IN BARISTA TRAINING?

SpecialCoffee has invested in a new in-company barista training space, to ensure that our quality promise is maintained, from the plant to the final cup.

WHAT IS THE REAL ITALIAN COFFEE?

Coffee is one of the undisputed pleasures of the Italian lifestyle. But what is the real Italian coffee? Espresso? Or pod, cappuccino, moka, Americano, on ice, latte macchiato?

COFFEE IS A FORM OF ART

What if coffee was an art form? Let's discover how, from the bean to the cup, coffee is creativity, inspiration, skill, imagination, and passion. In other words, coffee is an ephemeral and multi-sensorial form of art.
SpecialCoffee World
Recent Posts
Follow On Facebook

Would you like additional details about SpecialCoffee’s products or you need a quotation?
Please use this form to request more information or call us at +39 0342 685376

Back To Top
×Close search
Search
×